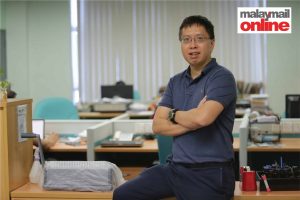 Vincent Choy believes all businesses — no matter their size — will benefit from Cloud technology. — Picture by Choo Choy May

KUALA LUMPUR, Sept 7, 2015 — The thing about technology is it changes. All the time. And business owners have to adapt and adopt or they are left far behind.

And now that cloud technology is here to stay — yes, it had its share of sceptics and disbelievers — businesses of all sizes need help navigating the shift in the IT landscape.

Vincent Choy, 48 has been part of this new wave of consultants for a few years now. Armed with a Bachelor of Electrical and Electronic Engineering degree from the National University of Singapore, he went into the field of IT and subsequently chalked up 20 solid years at a leading systems integrations company based in Singapore.

“I had a good team.  We went through everything – the dotcom frenzy and its eventual collapse and two major recessions,” said the unassuming Choy in an interview.

In 2012, he struck out on his own. Presently, he works with affiliated outfit Fedelis Sdn Bhd, an award-winning systems integrator focused on niche and emerging ICT technologies that clinched Microsoft’s Partner of The Year for Office 365, Symantec Cloud Partner of the Year and Winner of Microsoft’s APAC Platinum Circle.

Vincent specialises in advising clients on cloud computing – specifically, public cloud computing. The first thing he likes to focus his client’s attention on is the immense savings they can make with cloud technology.

To businesses, especially smaller companies that have not taken advantage of cloud technology yet, Choy asks: Why haven’t you?

“The smaller players now do not have to settle on buying a cheap server or cheap software without rich feature sets.  It can be accessible for as little as RM50 a month. Just because you are a small business doesn’t mean you should compromise on reliability, security and core features”. said Choy.

To take that road would be to transition to public cloud services, investing in the subscription to share a larger infrastructure with people around the world.  It means for instance instead of having a server physically located at the office, it is one that may be located halfway across the world and shared by other people.

“Moving your IT department into the cloud means that your IT needs is no longer the domain of just one IT person, but entire teams,” said Choy.

“For instance, with Office 365, Microsoft does all the managing, updates and maintenance.  If a server goes down, Microsoft fixes it. It’s 99.9 per cent uptime without all the headache and mess of an in-house system,” Choy explained.

The top two in heated competition right now for cloud-based productivity tools is Google Apps for Work and Microsoft Office 365.

While both have strengths and weaknesses, recent figures show that Microsoft 365 is cutting a wide path into businesses big and small.  In April 2015, Microsoft CEO Satya Nadella revealed that the 2nd quarter of 2015 already saw a significant 35 per cent increase in users and has broken the 10 million mark for the first time.

The other dimension to increasing productivity with cloud solutions that Choy focuses on is Enterprise Social, a product that is rapidly changing the way employees communicate with one another in a company.

“Do you notice how often we communicate via WhatsApp? Take this a bit further and apply social networking concepts formally into the workplace.  It changes the way employees talk to one another significantly,” says Choy.

He saw the vast potential in Yammer, a cloud-based product, that offers such an avenue which was almost unheard of in Malaysia before Microsoft came into the picture in 2012, by buying it for $1.2 billion.

“Something like Yammer can be used in so many different ways by so many companies in all sorts of industries.  It’s a whole environment and not just the chat. Better yet is its affordability,” stressed Choy.

“A smaller company of say 25 staff may have less communication barriers but a larger corporation spread across 25 locations and hundreds of staff find it challenging just pulling in the relevant persons to discuss an issue.”

Feedback on the ground across Red Robin outlets on a new menu item that used to take six to 12 months took just four weeks. How? Waiters and managers posted what they were hearing from customers on a collaboration tool called Yammer and Headquarters monitored the discussion. At an incredibly quick space of mere weeks, the burger recipe was fine-tuned and the new item was up and flying.

As an Enterprise Social Consultant, Choy and team at Fedelis help companies navigate this new and exciting platform.  While Red Robin is just one example, Choy and his team help companies realise how versatile and applicable this new platform is for all kinds of businesses in different industries.

Many corporations even use it as their avenue to engage new incoming staff.  A fairly new phenomenon called Pre-onboarding is being practised to help new staff familiarise themselves with the company, its environment, and resources even before their first day on the job.

Using Yammer, the new employee can access a discussion page before even the first day of work to find out information like dress code norms, public transport avenues, best traffic routes, vegetarian food choices and other newbie questions that may pop up.  He or she can interact with both other newbies to the company or Welcome Ambassadors. They will be well prepared for the new job and environment on the very first day of reporting for duty.

“Our job is to help organisations maximize the use of their social network,” he quips.

* If you need practical and sound advice on how to get the most out of cloud technology and enterprise social platforms, Choy can be contacted at [email protected]